Students learn about the final, Southern phase of the Revolutionary War, the last major battle in Yorktown, and the Treaty of Paris that brought an end to the war. They gather information from maps.

Here are the teacher pack items for American Victory:

In this experience, students learn about the final, Southern phase of the Revolutionary War, the last major battle in Yorktown, and the Treaty of Paris that brought an end to the war. They gather information from maps.


In 1778, the tide finally started turning in the Revolutionary War in favor of the patriots. In this experience, you will learn about the final, Southern phase of the Revolutionary War, the last major battle in Yorktown, and the Treaty of Paris that brought an end to the war. 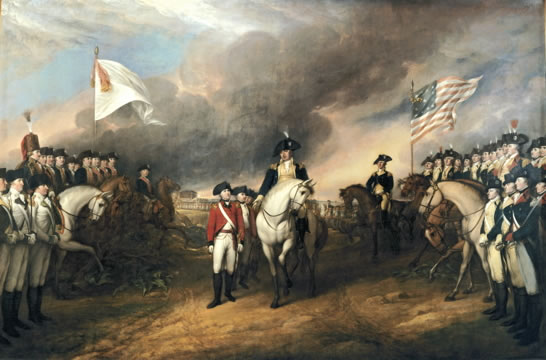 The Surrender of Cornwallis, painted by John Trumbull (1820)

When people use the phrase “turning point,” what do they mean? Review this timeline of turning points in World War II.

Turn to a partner and discuss the reasons given in the timeline for considering each event a “turning point.” What do they have in common? Now discuss as a class how to define a “turning point.” Your teacher will assign a class note taker to record the class definition.

Possible definition: a time at which a decisive change in a situation occurs, leading to a different outcome than previously seemed likely.

Try to suggest an example from some event that has happened within the school community, such as a student campaign for dress code or parking rights—what was the turning point that helped the campaign become a success?

End of Preview
The Complete List of Learning Experiences in American Revolution Unit.

Rising Conflicts in the West

Women in the Revolutionary War

Frontiers During the Revolutionary War

The French and Indian War

The Shot Heard Round the World: Lexington and Concord

Turning Points in the Revolutionary War

The First and Second Continental Congresses

Important People of the Revolution

African Americans in the Revolutionary War

New Taxes in the Colonies
Would you like to preview the rest of this learning experience, and get access to the entire functioning US History Through 1877 course for your classroom? Sign up using your school email address below.