Students learn about the question of Texas annexation from the point of view of the United States. They examine a political cartoon showing the two sides to the issue. Then they describe the issues leading up to annexation and why some people from the United States and other countries were against it. Finally they write a speech for or against the annexation.

Here are the teacher pack items for The United States Annexes the Republic of Texas:

The experience Anson Jones and Annexation examines the annexation issue from the point of view of Texas.


Texas won independence from Mexico during the Texas Revolution. Being an independent country had many drawbacks. The Texas economy was struggling, and Mexico and other countries did not recognize its independence. Many Texans wanted Texas to be annexed to the United States to help address these problems.

Study the political cartoon, published in 1844. Click the image to see a larger version and to read a transcript of the text. 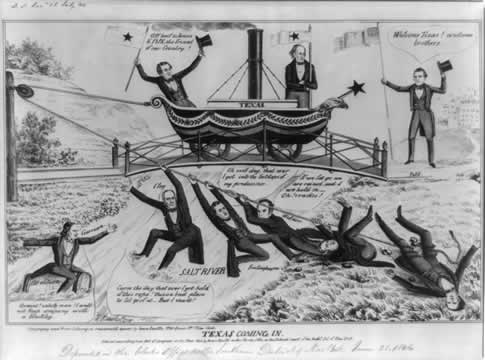 
Choose one of the bubbles of text. Explain if that person is for or against ​annexation of Texas to the United States.

Discuss the students’ answers. Ask students if they can think of reasons that U.S. politicians may have been for or against the proposed annexation.

Read a summary about the cartoon.