Here are the teacher pack items for The State of Texas and Mexico:


In 1824, Texas was part of the country of Mexico, which had declared its independence from Spain years earlier. At the time, Texas was home to about 20,000 colonists from the United States who had moved there. The Mexican government treated the Texas settlers unfairly and the people of Texas decided to apply for separate statehood under the Mexican government in 1833.

This was just the beginning of a long fight for Texas to achieve its independence from Mexico, become the Lone Star Republic, and finally to become a part of the United States of America. 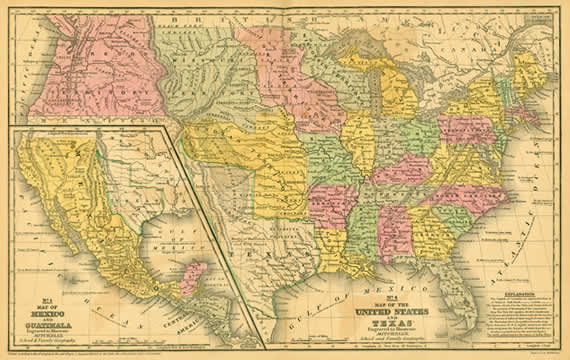 Map of the Republic of Texas


Think about what you know about the Texas War for Independence from Mexico. If you had to create a poster celebrating Texas independence, what image would you put on the poster?

Search the Internet to find an image representing Texas independence and upload it to the canvas below.

Discuss the images with the class. They may choose images representing key battles like the Alamo and San Jacinto, or portraits of leaders like Stephen F. Austin and Sam Houston, or symbols of the Texas Republic like the flag.

End of Preview
The Complete List of Learning Experiences in Westward Expansion Unit.