Students learn about the Radical Republicans and the steps they took to oppose Andrew Johnson's approach to Reconstruction. Then, students analyze the text of the Fourteenth Amendment.

Here are the teacher pack items for Radical Reconstruction:

In this experience, students learn about the Radical Republicans and the steps they took to oppose Andrew Johnson’s approach to Reconstruction. Then, students analyze the text of the Fourteenth Amendment.

Students will collaborate in small groups for scene 2 through scene 4. 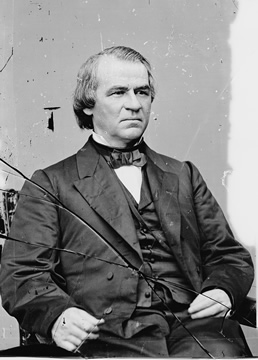 Andrew Johnson’s plan for Reconstruction favored the South and the southern way of life. He pardoned many Confederate leaders for their involvement in the Civil War and his plan allowed southerners to implement harsh laws, called black codes, which restricted the rights of freed slaves. In this experience, you will learn about Radical Reconstruction, an alternate plan that replaced Johnson’s Presidential Reconstruction.


Recall what you have learned about black codes and post one sentence about the restrictions that were placed on freed slaves as part of Johnson’s Reconstruction plan. If someone has already listed the point you remember, try to think of a different one.

Divide students into their small groups. When everyone is ready to continue, unlock the next scene.

End of Preview
The Complete List of Learning Experiences in Reconstruction Unit.

The Challenges of Reconstruction

African Americans in the South and Sharecropping

The Impeachment of Johnson

The End of Reconstruction

Lincoln’s Assassination
Would you like to preview the rest of this learning experience, and get access to the entire functioning US History Through 1877 course for your classroom? Sign up using your school email address below.